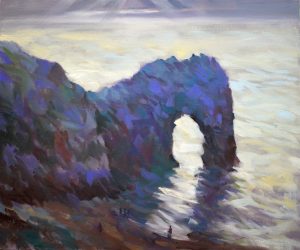 Durdle Dor  Dorset : is a well known destination for painters and tourists alike, situated on the south coast of Britain, so popular in fact that even Claude Monet painted the main features there, during the onset of Impressionism in the 19th century. A recent trip there with fellow artist Mike Arnold from Dubai resulted in this scene of the famous rock in winter light, painted by Monet. ” The light in January is spectacular and dramatic and I managed to capture this after a particularly cold but sunny day, as the light was beginning to fade.”